The Story of the U.S. Postal Service

In 2006 the United States Postal Service (USPS) handled 213 billion pieces of mail, the largest volume of mail in the history of the postal service since the beginning of the post office on July 26, 1775 when Benjamin Franklin was appointed the first Postmaster General by the Continental Congress.

On December 7th and 8th, 2006 the lame duck Republican House and Senate passed the Postal Accountability Enhancement Act (PAEA) (H.R. 6407) on a voice vote alone, and on December 20, 2006 President G. W. Bush signed the bill into law. Within the bill was a section that contained what could be considered a poison pill that could undermine the financial health of the United States Postal Service.

People of Venice Fight to Save their Historic Post Office

Venetians, artists, writers, poets join with politicians and Teamster President George Washington and President Abraham Lincoln to rally to save the Historical Art Deco Mural and Post Office from being sold. Speakers, including Councilman Bill Rosendahl, join again to support the endeavor. Music by Suzy Williams and The Nicknamers, Balloons, Poetry, Politicians, Venetians and Fun.

Jim Smith, MC for the Coalition to Save the Venice Post Office rally, said:

“Nearly every organization in Venice is in support of this [to save the Venice Post Office] and has been working together in a Coalition but this goes far beyond Venice. The postal service is being destroyed, both within and without, by its own management and by Congress which is beholden to Wall Street and to the 1 percent (%).”

The Venice Post Office was constructed in 1939 during President Franklin D. Roosevelt’s administration and in 1941 Edward Biberman painted an historic mural reflecting the history of Venice. Speaker, Terry Stoller, President of the California Area Local American Postal Worker’s Union (APWU) who represents the clerks and custodians in Southern California stated that the Venice post office is “well-constructed, beautiful and has genuine heart in it.” He also said, “The post office was mentioned in the U.S. Constitution more than 200 years ago.”:

“The entire postal service is being sold to the highest bidder, not to those with the highest purposes and the highest aspirations.”

Emily Winters, Chairperson of the Venice Arts Council said at the above Venice Post Office Rally:

“This post office really represents the hub of art activity in Venice.”

Winters said the Venice post office is a beautiful Spanish revival building built by the WPA with taxpayer dollars and the Edward Biberman mural has important historic significance.

Title VIII of the Postal Accountability Enhancement Act titled the “Postal Service Retiree Health Benefit Fund” contained Section 8909a which mandated that the United States Postal Service prepay its Retiree Health plans 75 years in advance in only 10 years. Beginning on September 30, 2007, in addition to other pension plan obligations, the USPS would have to pay an additional $5.4 Billion dollars or more each year until 2017.

No government agency or private company has ever had to prepay its pension plans 75 years in advance in only 10 years. This poison pill within the PAEA began sucking the money out of the profitable USPS when the 2007 severe Recession caused a sharp economic downturn and decline in mail volume.

Then in 2007 the economy tanked and mail volume declined.

New Thinking About the Postal Service

Prior to 1970 the postal service was called the U.S. Post Office Department. It was a cabinet level position and a full government agency.

Under President Nixon, a Commission was established that eventually resulted in the 1970 Postal Reorganization Act. This act began mandating that the postal service would no longer be a cabinet level position, it would no longer be a Post Office Department. Instead the postal service was told by Congress that it would have to act like a business. It would have to completely pay for itself without tax payer dollars. It would be a quasi public-private organization.

Instead of seeing its unionized work force as a positive asset, the Postmaster General and upper management seem to want to undermine the postal worker union’s ability to have a contract be respected. After tough negotiations in 2011 that resulted in the Unions agreeing to a wage cap, the Postmaster General Donahoe turned around and wanted to break the contract that said there would be no lay-offs of workers. Instead, jobs could be reduced by attrition when people retired. To date, thousands of jobs have been reduced due to attrition.

It turns out that the plan to close almost 3700 post offices and 252 processing facilities is based in many instances on the idea that the post office will move from 6 day delivery to 5 day delivery. Congress has not approved this plan and hopefully will reject it because it is bad for business, bad for local communities and bad for our economy. However, the postal service is trying to close post offices as fast as it can in spite of the moratorium on post office closures in December 2011 until May 15, 2012. Postmaster General Patrick Donahoe thinks he will save the USPS by ultimately closing 15,000 post offices over the next year. This is total upside-down thinking and will have negative impacts on local economies, regional economies, our national economy as well as jeapardize our upcoming 2012 elections.

The postal service is still moving ahead full speed to close postal facilities that it began trying to close on its list of July 26, 2011 and also lists prior to that date. Even though the moratorium is in place, each community needs to be aware of when their particular postal facility was first announced for “study” or “closure.”

Also, the moratorium does not include closure of a post office that is defined as a “relocation.” Technically a post office could be closed and sold if it is determined to be “relocated.” However, since a different facility is planned to be substituted for the current facility in the community, the United States Postal Service claims this is not a “closure.”

It really is a bait and switch tactic because the current post office building which may be of historical significance and contain important New Deal era art murals or sculptures would be sold to the highest bidder. The “relocation” tactic is an underhanded way to prevent the public from formally filing an appeal to prevent a “relocation” and subsequent closure and sale of the post office and its property. Some people in the USPS legal department must have been tasked with finding a way to shed the pesky public from trying to prevent closure of their post offices in their community.

If you have suggestions you can go to the USPS OIG website and make suggestions. Here are a few suggestions I think would help save our postal service:

1)  Expand services in current post offices to include so-called “non-postal” services such as notary public, copying of documents, issuing of licenses, verification services for the internet and more. Senator Sanders has many suggestions regarding this.

3) Keep 6 day delivery of the mail

4) Keep mail delivery standards for first class mail and other mail instead of slowing mail by two to three days. In our fast-paced era we need to insure mail delivery is fast and effective. Slowing mail is counterproductive and could lead to reduced revenue from customers turning away from USPS because it is so slow.

5)  Insure that historic post offices and post office murals are on the National Register so they are eligible for certain funds for renovation and renewal. Highlight these buildings as places of interest for tourists, especially buildings with art murals, sculptures and special architectural designs.

7)  Congress should allow USPS access to its overfunding of its various pension and retiree health plans. Recalculate assessments that are reasonable for paying into these programs to insure they are properly funded for workers.

8)  Stop forcing the Postal Service to operate only “as a business” without taxpayer support. The Postal Service guaranteed by our Constitution was created to improve communication and “bind up the nation” through providing for fast speedy mail.

Tell your Senator to support Senator Sanders’s Bill S. 1853 which would truly save the USPS. He speaks here about the current 5-year plan by USPS as being “Deeply Flawed.” 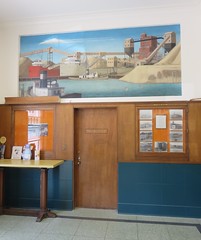 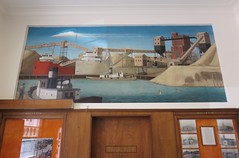 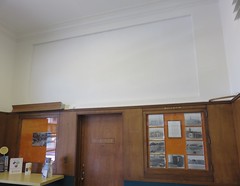 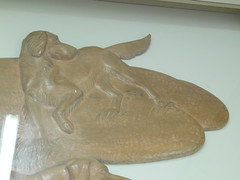 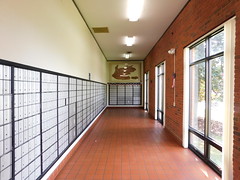 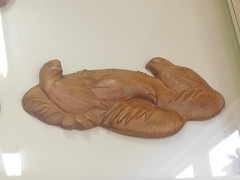 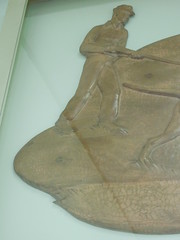